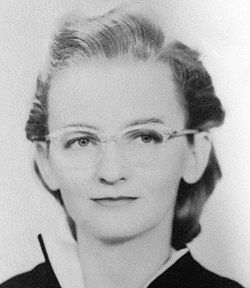 Alice Eleanor Jones
Alice Eleanor Jones (March 30, 1916–November 6, 1981) was born in Philadelphia, where her father Henry Stayton Jones worked as a photoengraver for a publishing firm and her mother Lucy A. (Schuler) Jones stayed home to raise her and her younger sister. Jones graduated from the University of Pennsylvania in 1936, continuing her education in the English department—from which she earned her Ph.D. in 1944, writing a dissertation on the seventeenth-century dramatist Shakerly Marmion. She married fellow graduate student Homer Nearing Jr. and moved with him to Swarthmore, Pennsylvania. They had two sons, Geoffrey and Gregory, in 1944 and 1948.

Jones had an intense but brief career as a writer of speculative fiction, publishing five stories in genre magazines between April and December 1955. In April of 1955, she published her first short story, “Life, Incorporated,” in Fantasy and Science Fiction under her maiden name. In June of the same year, Jones published “Created He Them,” her most successful speculative fiction work. Somewhat ironically—given that “Created He Them” details the deprivations suffered by an average housewife in the wake of World War III—Jones used the first check from that story to go on a shopping spree, buying herself “an extra special dress, the sort that wives of professors normally only look at in shops.”

Jones focused her subsequent literary energies on better-paying mainstream publications including Redbook, Ladies’ Home Journal, The Saturday Evening Post, Woman’s Day, American Girl, and Seventeen, to which she contributed both fiction and nonfiction well into the 1960s. She died in 1981 and is buried in Bala Cynwyd, Pennsylvania. Her stories are reissued in podcast form at Strange Horizons. 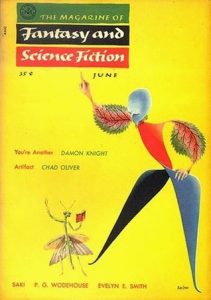