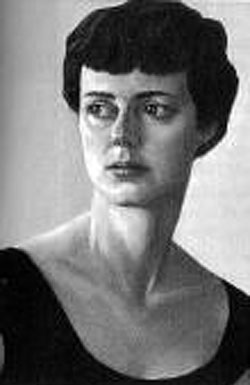 Carol Emshwiller in a 1957 portrait by her husband Ed Emshwiller.

Carol Emshwiller
Carol Emshwiller (b. April 12, 1921) was born Agnes Carolyn Fries in Ann Arbor, Michigan, the eldest of Charles and Agnes (Carswell) Fries’s four children. Growing up, she spent several years in France and Germany while her father, a professor of English and linguistics, was on sabbatical. Graduating from the University of Michigan with a B.A. in music in 1945, she joined the Red Cross, aiding U.S. troops in postwar Italy, then returned to Ann Arbor for art school. She married fellow art student Ed Emshwiller in 1949. Together, they attended the Ecole Nationale Superieure des Beaux-Arts (1949–50), toured Europe on a motorcycle, and eventually settled in Levittown, New York, where they had three children, in 1955, 1957, and 1959.

Emshwiller began publishing science fiction in the mid-1950s, after being introduced to key people within the genre by her husband, who became one of the principal genre artists of the era. During the 1960s, Emshwiller and her husband expanded their circle to include avant-garde musicians, painters, poets, and filmmakers—as she put it, “we were enmeshed. Embedded. Passionate about that sixties world and nothing else.” Not surprisingly, her experimental stories were often associated with science fiction’s “New Wave,” and in 1962 she received an honorable mention for her short story “Adapted”—the first of many such honors she would accumulate in subsequent decades.

In 1974 Emshwiller became an adjunct assistant professor at New York University and published her first story collection, Joy in Our Cause. She has continued to publish almost nonstop since then. Her novels include Carmen Dog (1998), The Mount (2002), Mister Boots (2005), and The Secret City (2007). Fellow science fiction author Ursula K. Le Guin praised her as a “major fabulist, a marvelous magical realist, one of the strongest, most complex, most consistently feminist voices in fiction”; to date, Emshwiller has won one World Fantasy Award, one Philip K. Dick Award, two Nebula Awards, and a World Fantasy Award for Lifetime Achievement (in 2005). Since her husband’s death in 1990, she has divided her time between New York City and Owens Valley, California. 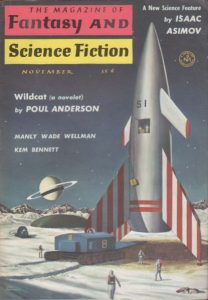