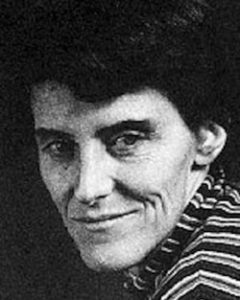 Katherine MacLean
Katherine MacLean (b. January 22, 1925) was born in Glen Ridge, New Jersey, and raised in Flushing, New York. She was the daughter of chemical engineer Gordon MacLean and homemaker Ruth (Crawford) MacLean, who raised her along with two older brothers. Beginning in high school, MacLean worked a wide variety of jobs, including “nurse’s aide, store detective, pollster, econ graph-analyst, antibiotic lab researcher, food factory quality controller, office manager, payroll bookkeeper, college teacher, reporter.” After a brief first marriage to Charles Dye, she married David Mason, with whom she had a son in 1957.

MacLean published her first short story, “Defense Mechanism,” in the October 1949 issue of Astounding Science Fiction while she was still an economics undergraduate at Barnard and working part-time as a lab technician. By the time her first collection, The Diploids, appeared in 1962 she had had over two dozen stories in print, many of which were celebrated for their innovative adaptation of ideas from the hard sciences and for their celebration of the social sciences. Along with a second story collection, The Trouble with You Earth People (1980), she is the author of four novels: Cosmic Checkmate (1962, with Charles V. De Vet), The Man in the Bird Cage (1971), Missing Man (1975), and Dark Wing (1979, with Carl West).

In the late 1960s, MacLean moved to Maine to care for her invalid mother, and in 1979 she married fellow science fiction author Carl P. West. She currently lives near Portland, Maine. The quality of MacLean’s work has long been recognized by the science fiction community: in 1962 fellow author and editor Damon Knight noted that “as a science fiction writer, [MacLean] has few peers”; and in 1971 she won a Nebula Award for her novella “Missing Man.” She was the professional Guest of Honor at the first WisCon, held in 1977 (WisCon is the largest and oldest feminist science fiction convention in the world), and in 2003 she was honored by the Science Fiction Writers of America as Author Emeritus. In 2011, she received the Cordwainer Smith Rediscovery Award.