The People (1972)
Based on “The People” by Zenna Henderson

The People, adapted from Zenna Henderson’s stories, aired as ABC’s Movie of the Weekend on January 22, 1972, starring Kim Darby and William Shatner and co-produced by Francis Ford Coppola. Henderson, then a 54-year-old grade school teacher, “flew in from Arizona to view a print” before the premiere and “came away delighted.” “‘My students will be so excited,’” she told a reporter. 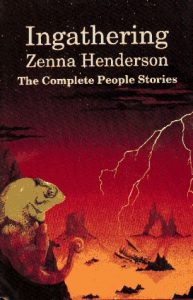