The Tunnel (2016)
Based on “The Tunnel Ahead” by Alice Glaser

Alice Glaser’s only known SF story (1961) is also one of the most frequently anthologized works of modern speculative fiction. In 2016, the director André Øvredal, known for his horror film The Troll Hunter, adapted it as an award-winning Norwegian-language short, The Tunnel/Tunnelen. 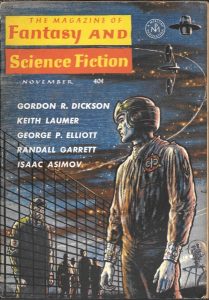