The first generation of women writing within the American SF magazine community began their careers in what is commonly known as the Pulp Era: the period between 1926 and 1940, approximately, when genre periodicals were most often printed on cheap wood-pulp paper. SF was not, at this point in its history, a genre that radiated social prestige, like the lyric poem or the realist novel. Indeed C. L. Moore, a writer credited then and now with bringing newfound character depth to the pulps, later remembered it as “a great act of daring” for her to purchase her first SF magazine, happening upon Amazing Stories at an Indianapolis newsstand. Her parents “had very definite ideas about literature” and “didn’t approve of ‘trashy’ fiction,” she recalled. 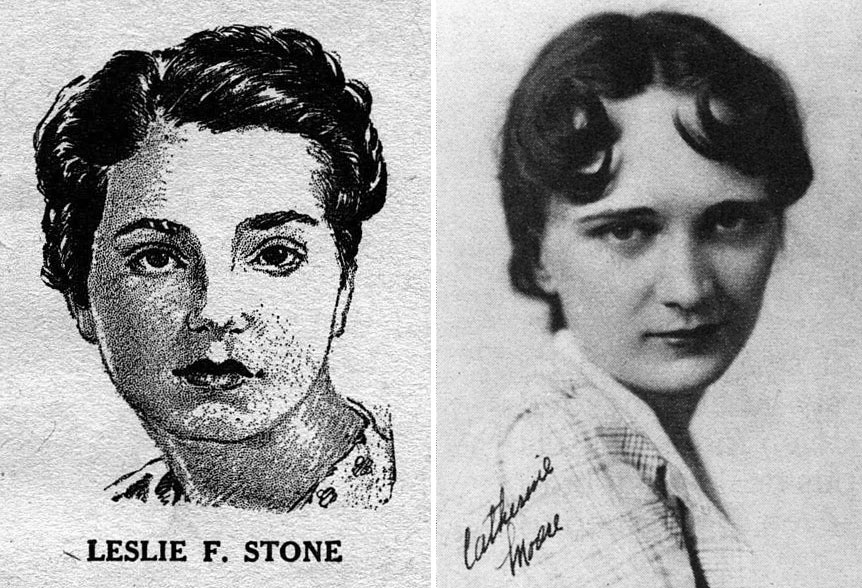 L: Portrait of Leslie F. Stone in the June 1932 WONDER STORIES. R: C. L. Moore, date unknown, from the collection of Julius Schwartz and reprinted in the March 1988 LOCUS.

Readers today with similarly definite ideas about literature, who are looking for subtle allusions or the artful defamiliarization of ordinary language, could certainly describe Pulp Era writers like Clare Winger Harris, Leslie F. Stone, and Moore herself as “pulpy.” Less interested in sentence-by-sentence literariness than in big what if questions and the seemingly boundless imaginative possibilities of futures to come—for optimism was one of the hallmarks of the era—these women bravely and collaboratively broke all sorts of new generic ground, trying out speculative themes that now seem like basic elements of American culture.

The first woman to publish in an SF-specialist magazine, Harris seems to have been the first writer of any sex to offer a taxonomy of possible science fiction plots, and wrote stories based on several of these plots herself. Her contemporary Leslie F. Stone imagined the first woman astronaut, the first black SF hero, and the first alien civilization to win a war against humans, helping to build a new kind of American literature from its foundations up.