Introduction by Lisa Yaszek
I. Many Different Futures

The Future Is Female! presents twenty-five stories written by three generations of American women from the launch of the first specialist genre magazines in the 1920s to the emergence of self-identified feminist SF in the 1970s. Adopting personae ranging from warrior queens and heroic astronauts to unhappy housewives and sensitive aliens, women were pioneers in developing our sense of wonder about the many different futures we might inhabit, partners in forging the creative practices associated with the best speculative fiction, and revolutionaries who blew up the genre when necessary to address the concerns of American women. 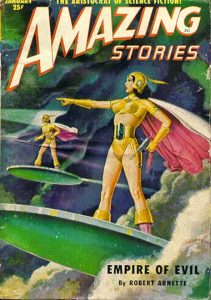 Stories speculating about the future of science, technology, and society began to appear across the globe over the course of the nineteenth century. But science fiction only came into its own in the American SF magazines of the early- and mid-twentieth century. Tantalizing readers with sensational cover art and even more sensational titles like Amazing Stories, Fantastic Universe, and Astounding Science Fiction, dozens of new periodicals promised to reveal the shape of things to come. They offered not only action-packed adventure narratives but informed, even sometimes prescient accounts of real-world scientific discovery and technological innovation. Along the way, they became laboratories for aesthetic exploration as well.

Authors used these magazines to test the themes and techniques that would become associated with the genre, probing and expanding the limits of fiction; editors distilled the results of these experiments, commenting on shared histories and future trajectories for SF; and fans volunteered ideas and opinions about everything from scientific accuracy to the necessity of sex in speculative writing. This truly collaborative process, still ongoing, has established SF as the premiere story form of technoscientific modernity.